Session #15: Introduction to Getting Numbers in the Attack –
End of Practice Scrimmage: Get Over the Halfway Line!

Time: Approximately 30 minutes (or whatever is left of practice).

Area: As per the diagram, extend the 18-yard box out to the sidelines. This makes for a shorter, but wider playing area – perfect for working on crossing and finishing.

Activity: Use (or make) a halfway line and state that all players (except the goalkeeper) must be past it in order for a goal to count. This simple rule, more than anything, has the ability to teach players to get up and support the attack. Don’t scream and shout at your players to “push up” over the halfway line. Just watch and listen. The first time that a team scores a goal and it doesn’t count because one of the attacking team’s defenders was in his own half, players on that team will start telling each other to “step” and “get up”. It works like magic! Play even numbers and arrange teams in a formation that reflects your desired game day formation. 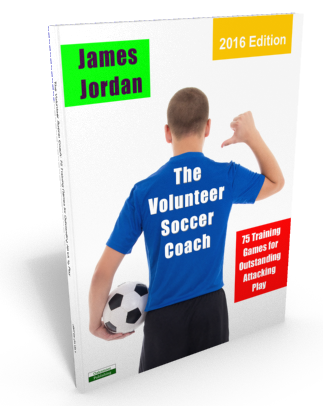 Are you a volunteer soccer coach with a full time job outside football? Then this book is for you! Minimizing jargon and looking to maximize the limited contact time you have with your players, The Volunteer Soccer Coach is a must-read practical book for coaches of all levels.  Utilising a game-based approach to soccer – where individuals actually play games rather than growing old in semi-static drills – author James Jordan offers 75 cutting-edge exercises across 15 detailed session plans which help players develop an attacking mindset, improve their skills, and, most of all, nurture a love for soccer.

At some point, it’s happened to every coach at every level: only a few players turn up to practice. After the practice plan goes out the window, how do you still put on an engaging and meaningful session in which your players can get better?

This happened today at one of the sessions I visited. We played World Cup the entire practice with just 5 u10 players.

With one player going in goal (and rotating after each game), we started with every player for himself, sometimes rolling two balls out at a time (initial rounds were played to 2 goals).

After a few rounds, we played with two teams of two and went through the following progressions/tweaks after each round:

We played with each set of rules 1-3 times (to allow rotation of goalkeeper and mixing of the teams) with a lot of success. I asked guided discovery questions at water breaks or in natural breaks (e.g. After a goal had been scored or between rounds).

I would recommend this set up for 3-7 players and it is very easy to implement.

What sessions do you run when you have a light crew?

Area: Full field (if you have it), or half field (put a cone goal on the halfway line).

Guided Discovery Questions: To be asked one at a time to give the players a rest, or during a water break.

Frequently, I will ask coaches what they plan on doing in their practice that day, and they will tell me that they are going to spend time on teaching throw-ins. Regardless of the age of the players, this focus tends to take the form of the coach standing in front of a line of players, talking for too long and then having the players do the action (sometimes one at a time!). Why are we spending valuable practice time teaching throw-ins in a way that is divorced from the reality of the game?

Remember, my mission is to abolish lines from youth soccer!

Another part of my mission is to make practices fun. As coaches, we do this by allowing the kids to play soccer.

Let’s say you have 12 players (or 16 or 20, or however many you have on the team). I would make two fields with cones goals the end of each field. I would split the players up into 4 teams, and, guess what…I would let them play! You can make it a round robin, playing 6 minute games.

Ok, so remember, we want to teach throw-ins. The only rule is that when the ball goes out of bounds (on any line), the restart is a throw-in. If the player does a foul throw, stop the game, show him how to do it, let him have a quick practice, and then restart the game!

Why should you teach throw-ins in this way?

After you have played your round robin, let the players get water and ask them what they have learned.

Guided discovery questions could include:

Following the guided discovery questions, go back to the round robin, except this time play goal kicks and corners (previously, every restart was a throw-in), so now it is looking more like “real soccer.” However, this time, say that every goal that is scored within 3 touches (or something like that) of a throw-in counts double (or triple). This will get them looking to make the most from their throw-in situations.

Finally, end with a scrimmage involving all players. When you see a foul throw, stop the play, correct the mistake, and restart the game. Again, this is teaching in context and the players will much more likely retain what you are teaching.

Try it. Let me know how it works.

Whether you are coaching U4 or U19, every practice needs to end with a scrimmage. I have found the best percentage of a practice devoted to a scrimmage is around 25-33% of the total practice time. That’s right, at the very least, you should let the kids play for a quarter to a third of your entire practice!

Ok, so, you let you kids scrimmage, but you notice a couple of defenders tend to hang out with the goalkeeper and don’t really do much of anything. I often see this on game day, too. First of all, when the play is down the other end of the field, the defense should be pushed up to the half-way line. Yes, the half-way line! Otherwise, you are attacking with 2 or even 3 less players. Are we trying to score goals, or go for a boring 0-0 game?

You might say, “well, I don’t want my defenders to go up because they will get beat over the top.” Yes, you are correct, because if your defenders stay back in games, they more than likely do in your scrimmage games, too. Thus, they never get practice in anticipating when to step up and when to drop back. Because they never get put in situations where they have to make these decisions, they are not able to do so in games, so the safe course of action is to tell them to stay back…and so we have a self-fulfilling prophecy that leads to boring soccer and players that don’t think for themselves.

You must be bold!

Here is the answer!

Add a half-way line in your scrimmage games. That’s it!

Ok, that’s almost it. Tell your players, that in order to score a goal, the entire team must be over the half-way line for the goal to count. You should take up your coaching position off to the side by the half-way line (so you can fairly judge if players are over or not), and watch the magic happen.

The first time a team “scores,” but their goal doesn’t count because a player didn’t make it over the half-way line in time will change everything. Try and see.

The benefits of playing this way are:

Added bonus: Once the players have got used to this game, make a new rule that makes each goal count double if the attacking team “catches” one of the defending team’s players on the other side of the half-way line. This will encourage the defending team to get all of its players back “goal-side” of the ball.

This works best with U8 teams and up.

Let me know if you try it and what results you experience.